As I’d written in the past, the transportation plan for the Lansdowne Park renewal relies on many people leaving their cars at home. The breakout of that modal share is quite aggressive.

When figuring out trends, it’s important to try to measure the same thing  (a 67s hockey game in this case). And find a baseline, which they’ve done by doing a survey of attendees of a game in March 2012. This is good news, they got the data before the games moved out to Scotiabank Place during construction.

I’ve compared them to the original June 2012 transportation plan’s expectation for modal share. I used the numbers for the 10,000 attendance; I know that’s a bit off the 8600 people who attended this 6s7 game, but it is the closest thing available.

How far off are we?

Here’s the overall share, you can see there’s considerably more people arriving by car than should be in the future, according to the plan:

We need to quadruple the number of people who walk, bike and take transit to achieve the goals. Note that pretty much nobody (0.3%) of people biked to that 67s game, and March 2012 was a great month to bike. Imagine January or February…

Weirdness for people arriving by car

What one wants is to have fewer cars, but not necessarily having fewer people arrive by car. Ideally, all cars would be stuffed to the gills with as many people as possible, and based on these numbers that’s what seems to be happening.

The relevant count is called People Per Vehicle (PPV). The expected number is 2.5, but right now they’re exceeding it at 3.1. The number of cars is actually lower now than what the plan calls for, so on the surface it looks pretty good!

Here’s a back of the napkin calculation: in March 2012 there were about 2400 cars and 2200 on-site spots. The new plan is for 2760 cars, but with only 1000 on-site spots. Where will the rest go? They will wander the streets, searching for parking spaces, making it less desirable to bike or walk.

So what’s the problem with biking?

Some things have been said about how to deal with transit (adding free shuttle buses) and reducing number of cars (providing access to remote parking lots, with said shuttles).

But nobody’s said anything about how to get so many people to walk and bike and no funding’s been secured for a new bridge at Fifth/Clegg. No new bike lanes have been proposed by the city. It’s supposed to happen like magic.

And, congestion is going to get worse. Biking will become even less desirable when there’s more motor vehicle traffic.

Notes on the data sources

The modal share measurements from the March 2012 67s game was presented on February 28th 2013 at the Lansdowne Transportation Advisory Committee called “Lansdowne Monitoring Plan – Implementation”. The presentation is a little confusing, but you can see it referenced on slide 19. It breaks out the modes into a greater resolution, so I did some consolidation to match the original transportation plan: transit is the sum of OC Transpo, Charter Bus and Para Transpo. Taxi got merged into Auto Driver. Here’s the slide that shows the measurements. 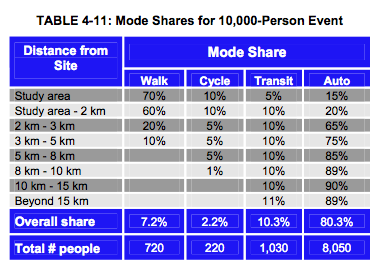 The modal share estimates for the plans are in Table 4-11 in the Lansdowne Revitalization Transportation Plan from June, 2010 (the latest). 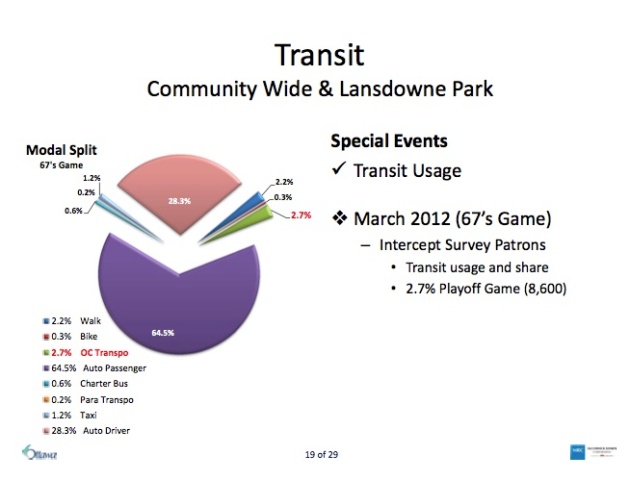