Museum of Nature: it’s all about the parking revenue

3 Comments Posted by alexthepuffin on September 17, 2013 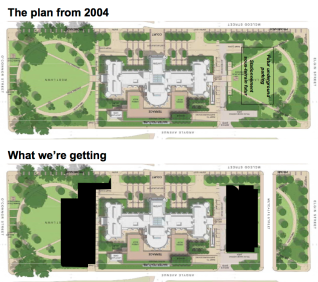 This compares the original plan, and what will actually be in place in 2014.

I went to the Public Information Session last night at the Museum of Nature.  The original plan was to maintain a park on the west side of the building, now they’ve chosen to install a 96-spot parking lot. That’s different than what it was supposed to be.

Naively, I went there to talk to them about cycling aspects of their plans. There were none, and clearly they’d never done any research. They lied about reading the Ottawa Cycling Plan and there was nothing in their plans about biking at all. There were many myths shared (“nobody bikes in the winter”, “who bikes to a museum?”, “why you just walk 100m?”, etc). It was like we were back in 2005. Or at an MTO information session about widening the 417.

For more details on the history, etc, read the article I started at Developing Ottawa.

The story they tell

The story they tell is that they have more visitors than ever. They looked into everything, parking was their last resort (see page 9)! But they needed parking, so would preserve trees and hey, it was only 96 spots! It could have been a lot more! 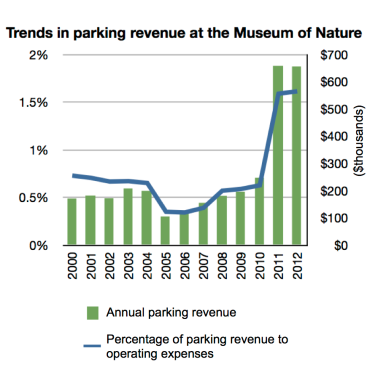 This chart shows the annual parking revenue (in green bars) and the amount of the museum’s operating expenses offset by parking (in blue).

Then, the Conservative government mandated that museums generate more revenue (even though this museum’s parliamentary allocation is higher than ever). In 2011 and 2012, they created a ‘temporary’ lot on the west lawn and understood the profit potential (about $650k, 1.6% of expenses). At this point, they’re addicted to parking revenue. The 2013 budget depends on continuing with that revenue. They’d have to lay off their co-workers if they cut that.

This was always about parking revenue, it was never about figuring out their visitors’ transportation needs. They didn’t bother with a TDM study, surveys, investigating better transit or bike infrastructure, etc. That could only cut into their parking revenue.

Other costs to society (local green-space, maintaining roads, health and environmental costs, etc) don’t hit their bottom line. They have no incentive to care.

(All my numbers come from the museum’s annual reports, which are refreshingly easy to read.)

To those in the community, here’s my suggestions to you: give up. You lost this battle a long time ago. Focus on something you can win.

There’s an obvious argument that a museum that promotes nature shouldn’t be enabling fossil-fuel guzzling motor vehicles. Nobody cares.

Update: I updated the map. I’d made a mistake and my map was misleading. I’d forgotten that Metcalfe was still there and extended the parking lot on the east side all the way to Elgin. Based on their published plan (in the map above), there’s a future appropriation of the road expected. It seems like a difficult negotiation to me. There’s another story there.